The earnings season has kicked off recently and investors are focusing their attention on the results that companies report for the last quarter. Researchers at TrackStar, which is the official newsletter of Intuition, an InvestingChannel business, are following closely the stocks that financial advisors are most interested in, based on the tickers that advisors are looking up. In the week between April 17th and April 23rd, financial advisors kept in the spotlight companies that reported their financial results, although they were also interested in companies that didn’t report their results, but were trending for different reasons. Let’s take a brief look at the 20 most searched tickers and see the events that might have attracted attention to the stocks in question. 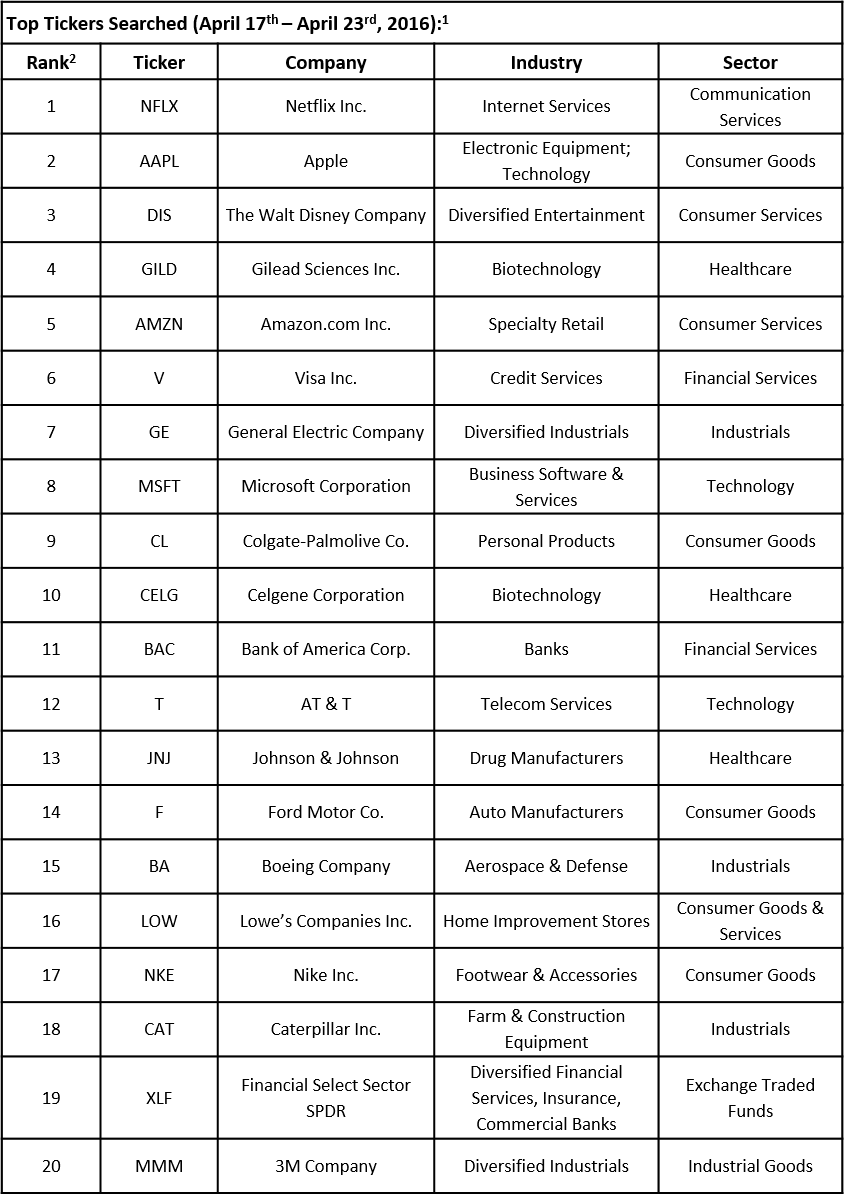 The first two spots in the list of the 20 most searched tickers, where occupied by tech stocks, specifically Netflix (NASDAQ:NFLX) and Apple (NASDAQ:AAPL). Netflix’s popularity among financial advisors came on the back of the company’s first-quarter results reported on Tuesday. Even though the company surprised the Street with EPS of $0.06, double compared to estimates, its revenue of $1.96 billion was slightly below the estimates of $1.97 billion. However, Netflix is one of the few companies, where investors do not focus too much on earnings, but rather on growth. Even though Netflix reported net new memberships of 6.74 million for the quarter, which topped the expectations of 6.13 million net adds, the company said it expects 500,000 net adds in the US and 2.0 million net new members internationally, versus estimates of a growth in memberships of 586,000 in the US and 3.50 million internationally.

On the other hand, Apple was scheduled to report its financial results only this week, but since it is one of the most popular stocks overall, the hype around the company’s results starts around the end of a calendar quarter. Lately, there have been reports that investors might be disappointed in Apple’s results for the second fiscal quarter, mainly due to a decline in iPhone sales. Last week, Taiwan-based TrendForce lowered the estimates for the iPhone shipments for the both last quarter and full year. Analysts said that one of the main reasons for the decline in shipments is the “lack of exciting features”. The company’s earnings report released on Tuesday evening materialized the fears as it missed both earnings and revenue estimates.

The other two tech stocks that made the list were Amazon (NASDAQ:AMZN) and Microsoft Corporation (NASDAQ:MSFT). The latter posted its financial results on Thursday and missed both top- and bottom-line estimates with EPS of $0.62 on revenue of $22.08 billion. Amazon is scheduled to report its results later this week.

Trailing Netflix and Apple was Walt Disney (NYSE:DIS), which was in the spotlight after the company’s The Jungle Book reboot earned over $103 million in its first week-end. Overall, consumer goods and services stocks dominated the list, including names such as Colgate-Palmolive (NYSE:CL), Ford Motor Company (NYSE:F), Lowe’s Companies (NYSE:LOW), and Nike (NYSE:NKE).

On the healthcare side, the list of most searched tickers was dominated by biotech, particularly Gilead Sciences (NASDAQ:GILD) and Celgene Corporation (NASDAQ:CELG), both of whom are usually featured among the most searched tickers. In addition, three industrials stocks ranked in the top, namely General Electric (NYSE:GE), Caterpillar (NYSE:CAT) and 3M Company (NYSE:MMM). General Electric and Caterpillar reported their financial results at the end of the last week and while the former posted better-than-expected figures, the latter’s results fell short of expectations. 3M posted its earnings earlier this week, beating the estimates on both top and bottom lines. Finally, the only ETF that made the list of the top 20 most searched tickers last week was Financial Select Sector SPDR (XLF), which tracks financial companies, including six biggest US banks, all of whom reported their results in the last two weeks.

Intuition is a global research, education, technology and creative solutions business, from InvestingChannel, Inc., that invests in intelligence to make the art of human-driven communication and decision-making more intuitive in financial services.
1Disclaimer: This newsletter is for information purposes only and opinion based on a financial advisor data across a selection of websites. Investors should be cautious about any and all investments and are advised to conduct their own due diligence prior to making any investment decisions.
2Rank is determined solely by highest amount of ticker searches by financial advisors in the given week across a selection of websites through our database