The US stock market further gained some ground during the last week that was shortened by the Independence Day. The S&P 500 gained 1.28% between Tuesday and Friday, boosted on Friday by a strong jobs report, which showed the creation of 287,000 jobs in June, significantly higher than the estimates of 180,000. The unemployment rate amounted to 4.9%, slightly below the consensus estimate of 4.8%. The strong nonfarm payroll data increases the chances of an interest rate hike sooner than expected, although many believe that the Fed is unlikely to raise the rate this month. Other than that it was a relatively uneventful week and financial advisors kept their focus on companies that can provide a stable growth and that have a sound financial position.

According to the list of the 20 most-searched tickers compiled by TrackStar, the official newsletter of the official newsletter of Investing Channel’s Intuition division, the two most popular stocks among financial advisors were Apple Inc. (NASDAQ:AAPL) and Netflix Inc. (NASDAQ:NFLX), unchanged from the previous week. Overall, five tech stocks made the list, including Amazon.com Inc. (NASDAQ:AMZN), Microsoft Corporation (NASDAQ:MSFT), and Cisco Systems Inc. (NASDAQ:CSCO). The second most-popular sector was Financial, which was represented in the list by Bank of America Corp. (NYSE:BAC), Visa Inc. (NYSE:V), Wells Fargo & Co. (NYSE:WFC), and Citigroup Inc. (NYSE:C). In this article, we are going to focus on the Telecom sector, from which AT&T (NYSE:T) and Verizon Communications Inc. (NYSE:VZ) were featured in the list and we will take a closer look at Verizon. 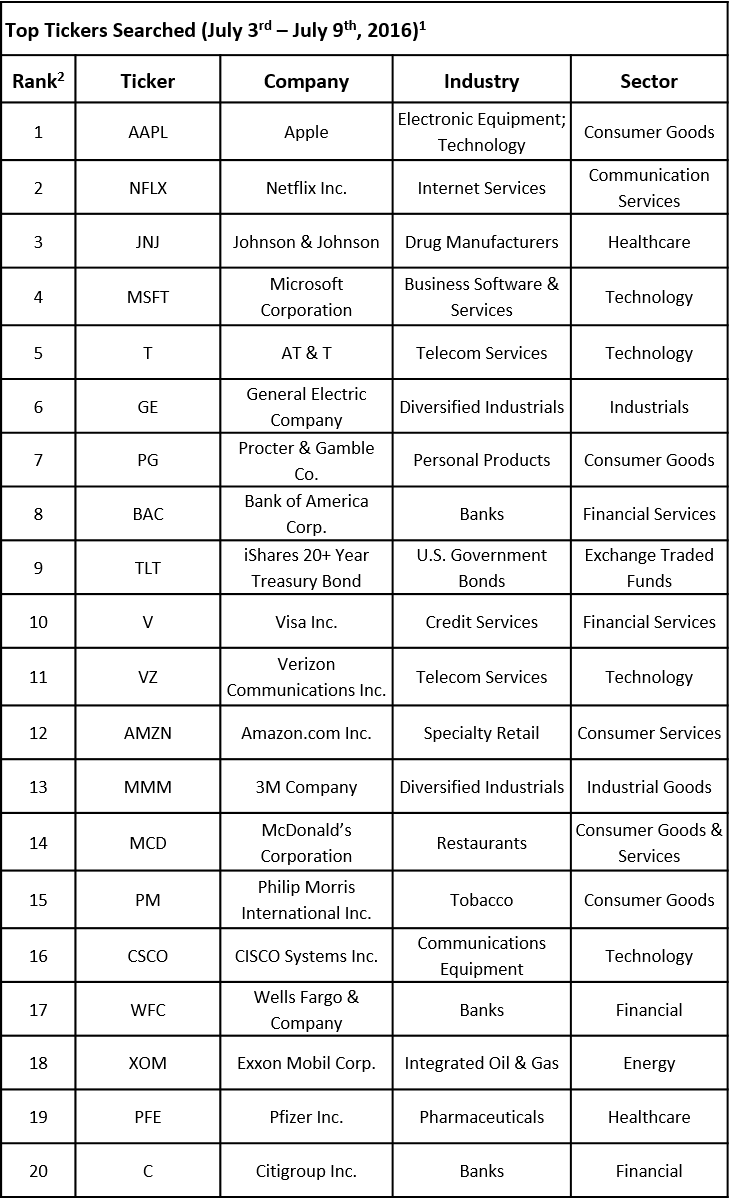 The stock of the $226 billion leading US wireless provider inched down by 0.50% during the last week, taking a small hit on Wednesday amid news that Verizon Communications Inc. (NYSE:VZ) would increase the rates on its plans, but also offer more data. The monthly rates were increased by $5 for its cheapest ‘S’ plan and medium ‘M’ plan, while prices for its ‘L’, ‘XL’ and ‘XXL’ plans were increased by $10 starting July 7. At the same time, ‘S’ and ‘M’ plans now offer 2GB and 4GB of data, while the other three more expensive plans offer 8GB, 16GB, and 24GB, respectively.

Verizon also revamped its app in order to allow users to easier switch between plans and control their billing and introduced a ‘safety mode’ that slows down the speed considerably once the monthly limit is used up, and which will be offered free of charge for the two most expensive plans, but will cost an additional $5 for the ‘S’, ‘M’ and ‘L’ plans. Verizon also emulated its competitors AT&T and T-Mobile by offering customers the possibility to transfer the unused data for the next month and started offering unlimited text and calls to and from Mexico and Canada for some of its high-end plans.

Even though the stock was not significantly affected by Verizon’s announcement, it captured the attention of analysts and market experts. Even though Verizon is considered to have a high-quality network, it still has to fight for subscribers and compete against lower-cost T-Mobile and Sprint, as well as AT&T, in a saturated market. Verizon plans that users will accept the higher bills in exchange for more data and the changes are the latest in a string of moves by telecom companies and highlight the fierce competition.

The impact of Verizon’s latest changes on its financial situation are yet to be seen, but at the current levels, the stock does look attractive, trading at just 12.6 times earnings, cheaper than its competitors. However, what also makes Verizon an interesting investing opportunity is its diversification beyond its core wireless business. Last year, Verizon acquired AOL, which allowed it to tap the internet advertising market and currently the telecom giant is seen as one of the main bidders for Yahoo! Inc. (NASDAQ:YHOO) core business, which will solidify its presence in online advertising and will allow it to grow further amid a slowdown in the telecom market.