The S&P 500 inched down last week amid retail data that showed a 1.3% growth in consumer spending in the US, which was higher than estimates of a 0.8% growth. However, even though the data showed the highest growth in spending in a year, it was offset by weak sales posted by J.C. Penney and Nordstrom. In addition, a strengthening dollar put pressure on oil prices as investors headed for the exists following a small rally. With the earnings season slowing down, financial advisors seem to be looking for more portfolio diversification.

According to TrackStar’s list of the 20 most-searched tickers among financial advisors last week, five tickers belonged to Exchange-Traded Funds, which is a relatively rare occurrence. TrackStar is the official newsletter of Intuition, an InvestingChannel business. In this article, we are going to take a closer look at some of the most popular stocks and some events that might have attracted financial advisors’ attention towards them. 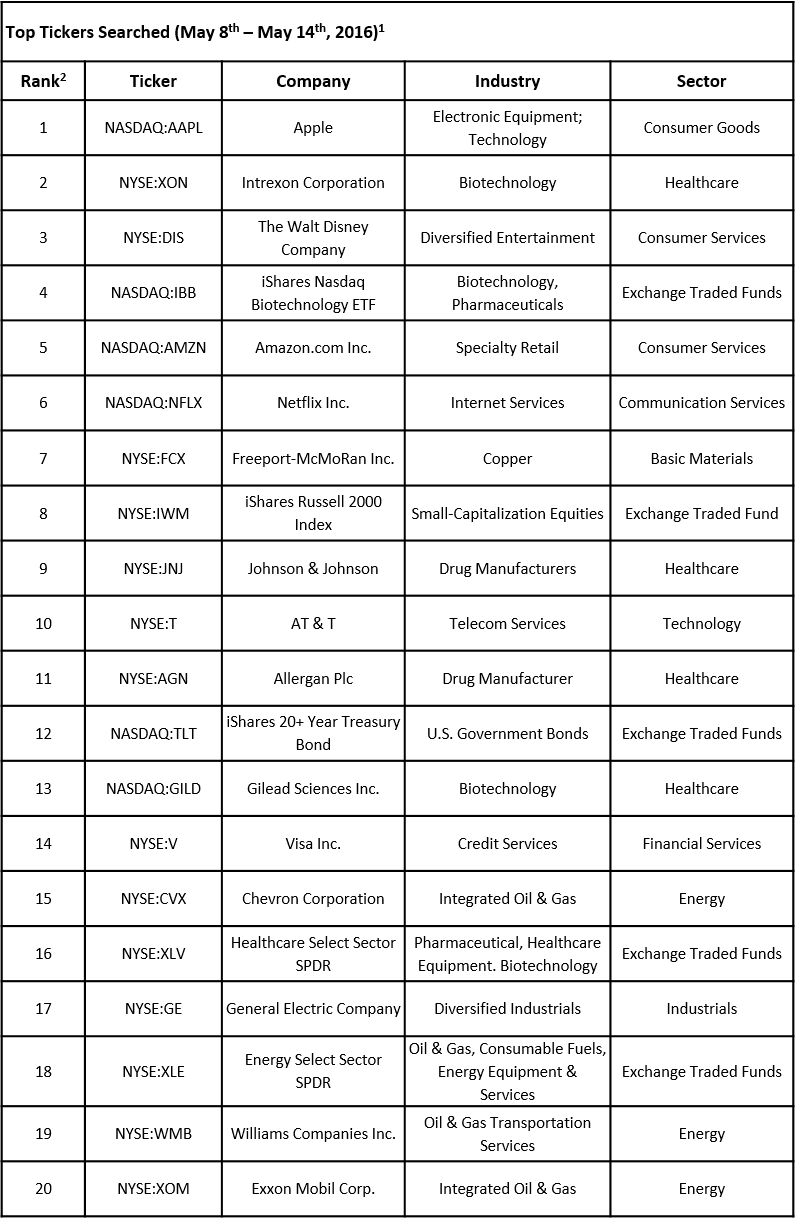 Not surprising, Apple Inc. (NASDAQ:AAPL) ranked at the top of the list. Last week was marked by the iPhone maker’s stock briefly falling below the $90 level on Thursday amid investors having the same concerns regarding iPhone demand and fears that the new iPhone 7 might not be the device that would boost Apple’s sales. The stock rebounded slightly this week over news that Warren Buffett’s Berkshire Hathaway acquired a $1.0 billion stake in Apple during the first quarter, which some took as a sign that the stock could be a good bet for value investors. However, at the same time, we should not forget that a number of reputable hedge funds exited or cut down their positions during the first quarter, including Carl Icahn’s Icahn Capital, Chase Coleman’s Tiger Global Management, Jim Simons’ Renaissance Technologies, and Philippe Laffont’s Coatue Management.

Another tech stock that made the list is Amazon.com Inc. (NASDAQ:AMZN), trending on the back of strong retail data combined with declining sales at brick-and-mortar retails, which highlighted the expanding presence of online shopping in the life of US consumers. The only other tech stock in the list was Netflix Inc. (NASDAQ:NFLX), which was in spotlight in connection with anticipated price increases, but which were postponed into June, according to reports.

As stated earlier, five ETFs appeared in TrackStar’s list of most-searched tickers, the first being iShares Nasdaq Biotechnology ETF (NASDAQ:IBB), which ranked on the fourth spot, down from the second registered in the previous week. Gilead Sciences Inc. (NASDAQ:GILD), which represents the fifth-largest holding in IBB’s portfolio ranked on the 13th spot in the list, versus the fourth a week earlier. On the other hand, Intrexon Corp. (NASDAQ:XON), which is not part of the NASDAQ Biotechnology Index followed by IBB, was the second most-searched stock amid news that it will most likely get approval from Washington to combat the Zika virus in the US, using genetically modified mosquitoes developed by Intrexon’s subsidiary Oxitec.

Healthcare was the most popular sector in the list and aside from the aforementioned Gilead and Intrexon, two other stocks were Johnson & Johnson (NYSE:JNJ) and Allergan plc (NYSE:AGN). Healthcare was followed by energy in terms of popularity, with three stocks ranking at the bottom of the list: Chevron Corporation (NYSE:CVX), Williams Companies Inc. (NYSE:WMB), and Exxon Mobil Corp. (NYSE:XOM).