The US stock market inched higher last week as investors were betting on the Fed to remain accommodative regarding the interest rates following the FOMC meeting that took place this week. In this way, the S&P 500 and Dow Jones inched up by around 0.50% and 0.20%, respectively, while the NASDAQ Composite surged by more than 2% during the trading week between September 12 and September 16.
The bet paid off as, yesterday, the Federal Open Market Committee decided to keep the benchmark interest rate intact, even though most Fed officials expected at least one hike this year. However, the Fed did point out to an improving economy, but said there is more room to grow. In any case, the investors were happy with the outcome and sent the main indices higher.

As usual, TrackStar, the official newsletter of Investing Channel’s Intuition division, has compiled a list of 20 tickers that ranked as the most searched among financial advisors last week. The list revealed that Apple Inc. (NASDAQ:AAPL) and Alphabet Inc. (NASDAQ:GOOG) remained on the first two spots as in the previous weeks. They were followed by Wells Fargo & Company (NYSE:WFC), which took the stage following a scandal that emerged a week earlier when it was revealed that the bank’s employees created over 2 million fake credit-card and deposit accounts in order to meet their sales quotas.

Among other highlights in TrackStar’s list is Freeport-McMoRan Inc. (NYSE:FCX), which appeared in the spotlight following the sale of its oil and gas assets in the Gulf of Mexico to Anadarko Petroleum Corp. (NYSE:APC) for $2.0 billion. Wynn Resorts Ltd. (NYSE:WYNN) also made an appearance in the top amid news of positive revenue growth registered in Macau for the first time in over two years. Oracle Corporation (NYSE:ORCL) also made the list in connection with its financial results reported on September 15. 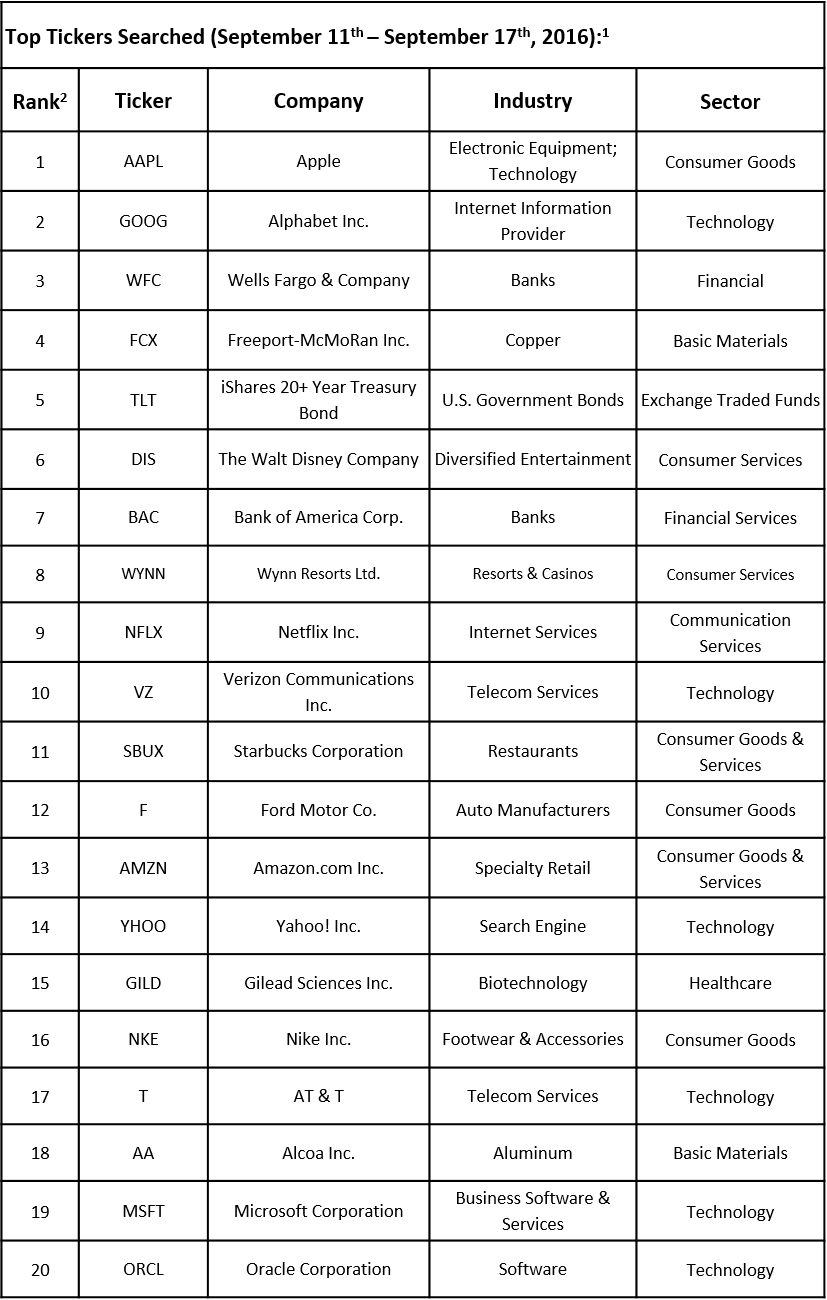 However, let’s circle back to Wells Fargo & Company (NYSE:WFC). In the corporate world, scandals are a pretty common phenomenon, but the situation uncovered at Wells Fargo shook the masses by the huge size of the people involved. The company said it fired around 5,300 employees in connection with creation of fake accounts since 2011, which underlined how companies create a culture that pushes people towards unethical behavior by imposing high quotas, which, according to some reports, were impossible to be reached in another way.

The full extent of the scandal is not totally clear yet. Wells Fargo was fined $185 million by several regulators, but there are still questions related to further lawsuits and maybe even criminal prosecution, as well as compensations to customers that were unknowingly involved in these actions and probably had their credit scores affected. Wells Fargo will also have to find a way to make it right to the employees and to review its tactics regarding the sales quotas. And then there is the effect that the scandal will have on the whole banking industry, or even on the majority of companies where employees have sales quotas set by the management.

One name that was mentioned several times in connection with events at Wells Fargo, aside from CEO John Stumpf, was Warren Buffett. The billionaire CEO of Berkshire Hathaway holds almost 10% of Wells Fargo and earlier this year had plans to raise it further. As one of the largest shareholders, Warren Buffett has the ability to either calm the investors by reiterating his belief in the company and its management or to send them in the panic mode. However, earlier this week, Buffett told Fox Business that he is going to keep silent regarding the issues at Wells Fargo until November.

It’s also interesting that analysts covering Wells Fargo had mixed opinions regarding the developments surrounding Wells Fargo. Some of them, such as Morgan Stanley or Robert W. Baird, actually upgraded the bank’s stock in the last couple of days, while others, including JPMorgan Chase & Co., Barclay’s and Atlantic Securities, either downgraded it or reduced their price targets.